Note that there are two related citation styles in the Chicago Manual of Style, the footnoted version and the author/date version.

The American Studies department uses the American Quarterly citation style. This is derived from the Chicago Manual of Style, so information on that style is provided below. 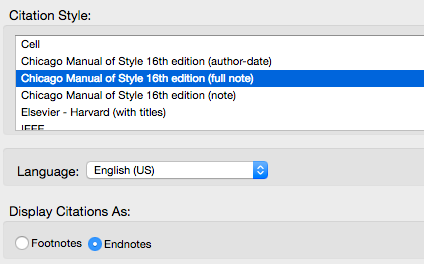 If you are using Zotero, click the "document preferences" button on your toolbar in Word, select "Chicago Manual of Style 16th edition (full note)" and then click the "Endnotes" radio button. Do not add a bibliography at the end of your document.

If you are using Mendeley, select the "Chicago Manual of Style 16th edition (note)" citation style. Use Word to create the endnotes (Insert > Footnote > "Endnotes" radio button), then insert your citation into the endnote created by Word. Do not add a bibliography to the end of your document.

If you are using the EndNote program, talk to Iris about getting this working for you.

Andrea Weiss, In the Shadow of the Magic Mountain: The Erika and Klaus Mann Story (Chicago: University of Chicago Press, 2008), 55-56.

An annotated bibliography is made up of a bibliographic reference followed by a brief description (called an annotation) of the content and importance of the work. The annotation begins one line down from the reference, and it's best to press the Shift key and the Return key together so that it behaves as if the entire thing is one paragraph. (See this example)

You don't have to print everything you read! The tools below can help you accomplish your research far more quickly while at the same time help you to find the really key resources and make key connections between them. If these exact worksheets don't click for you, use them to help you come up with your own method of tracking the sources and terms you find.